Photo taken by a netizen of J-20 with new coating. Photo by Gangwa of fyjs.cn 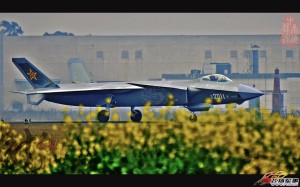 Photo taken by a netizen of J-20 with new coating. Credit: fyjs.cn/blong_shi

Some new photos of China’s new version of J-20 with new stealth coating have recently been posted on the Internet. The New J-20 no. 2011 shines bright in the photos with silvery coating. Some web users exclaimed that it looked like a sci-fi galaxy fighter jet and simply mad one blind by its brightness. Analysts say that the new coating makes the fighter better undetectable.

Source: huanqiu.com “New J-20 with reflecting coating looks like a sci-fi galaxy fighter” (summary by Chan Kai Yee based on the report in Chinse)