Why Is China Busy Showing Off Its Mobile ICBM Troops Now?

An ICBM erected at night

An ICBM erected at night 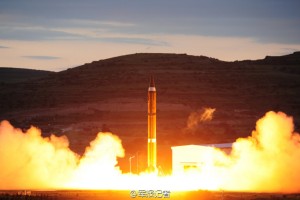 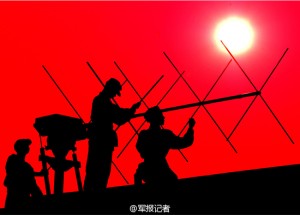 ICBM brigade commanders studying a map in their tunnel 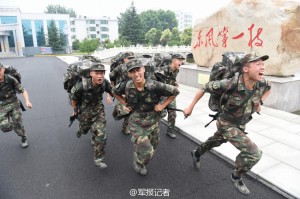 ICBM brigade’s garrison outside the tunnel

When US Defense Secretary Robert Gates visited China in January 2011, China showed its muscles by the first test flight of its stealth fighter jet J-20.

When the tension in the East China Sea might grow into a war, China’s top official media CCTV displayed in its primetime news footages about China’s strategic submarines from October 27 to 29, 2013 to tell the US that if US retaliated with nuclear weapons when China had sunk a US aircraft carrier, China had the second-strike capabilities of not only land-based ICBMs but also SLBMs from its strategic nuclear submarines.

US Defense Secretary Hagel’s China visit from April 7 to 9 seemed friendly, but there was obvious tension in his talks with senior Chinese generals. No wonder, on April 18, China showed off its mobile ICBM troops in its official CCTV’s primetime news report titled “Second Artillery Corp has enhanced its strategic deterrence by building up its real war capabilities”.

Hagel’s criticism of Chinese actions in the South China Sea in his speech on May 31 proved the tension during his Beijing visit.

Now, why is Beijing busy showing off its mobile ICBM troops?

For two days in succession on July 26 and 27, CCTV showed in its primetime news footages about a brigade in its Second Artillery Corp that has specialized in operating ICBMs for 56 years.

In addition, a reporter of Global Times visited the troops and writes a very long report on China’s ICBM troops. He has posted some rare photos of the troops in his microblog, which I post on top of this post.

Lots of Chinese media including some Taiwanese media carry summary of CCTV and Global Times’ reports.

We all know that the ICBM force is China’ well kept top secret. Why did China reveal the secret now?

The most impressive footages in CCTV’s reports are about China’s ICBMs moving out at night into deep mountains in some of its many real-war drills to be erected and launched in very short time.

All the reports describe the hardship of the troops’ life as they have to stay closed in tunnels in deep mountains for more than one month without sunlight.

Taiwan’s chinatimes.com says, “In order to ease officers and soldiers’ ‘miss of the sun’, the troops have invented a ‘sunrise’ ceremony to put the picture of a red sun on the wall at local sunrise time.”

The reports also describe the good education and training the troops have received and the honor the troopers enjoy in having their ashes kept at Babaoshan Revolutionary Cemetery along with those of deceased senior Party and government officials.

CCTV concludes its first report by saying that the troops “hide in the most secret recesses of the earth and are able to flash forth to attack the enemy from the topmost heights of heaven” (China’s gifted strategist Sun Tze words in his The Art of War).

We now return to our question:

Why is Beijing busy showing off its mobile ICBM troops now?

Recently, US Pacific Fleet commander Adm. Scott Swift has repeatedly provoked China by denying China’s claim to the area within its nine-dash line and threatened tat US warplanes would fly over Chinese artificial islands and US warships would enter the waters claimed by China.

China certainly cannot tolerate such infringement on its territorial sovereignty. In fact in the past, China has shot down US aircrafts when they entered Chinese airspace and the US did not retaliate but keep the incidents confidential.

What if China shoots down a US warplane or sinks a US warship when the warplane or warship enters the airspace or waters claimed by China? Will there be a war? China shows off its strategic nuclear force to show its will to fight in defense of its sovereignty not only a conventional but also a nuclear war.

Is that but bluffing? I do not know, but there is real risk of a war between China and the US if the hardliners in either of the two prevail.

Summary translation of the following reports by Chan Kai Yee is given in this article:

Chinatimes.com “Communist troops display its strength by revealing its ‘Dongfeng No. 1 Limb’”

2 Comments on “Why Is China Busy Showing Off Its Mobile ICBM Troops Now?”