Will War of Words between China and US Grow into a War of Deeds? 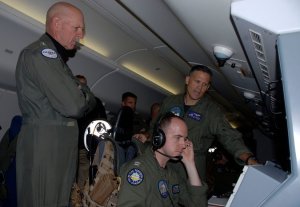 Yesterday this blogger gave his reply to the question why Beijing is busy showing off its mobile ICBM troops now that it shows China’s determination to shoot down or sink US warplane or warship when it invades the airspace or waters claimed by China The post said:

What if China shoots down a US warplane or sinks a US warship when the warplane or warship enters the airspace or waters claimed by China? Will there be a war? China shows off its strategic nuclear force to show its will to fight in defense of its sovereignty not only a conventional but also a nuclear war.

Is that but bluffing? I do not know, but there is real risk of a war between China and the US if the hardliners in either of the two prevail.

No one knows for sure whether there will be a war or the scale of the war if a war really breaks out, but the tension between China and the US in the South China Sea is a reality. The New York Times gives a vivid description of that in its report today titled “China Blames U.S. Military Actions for Tensions in the South China Sea”.

It says, “The official, Col. Yang Yujun, a spokesman for the Ministry of National Defense, said it was the United States, not China, that was to blame for rising tensions in the resource-rich South China Sea, where China and several other countries are engaged in territorial disputes.”

Obviously, China believes that there is rising tensions and responded with showing off its mobile ICBM troops, ICBM defense radar (see this blogger’s post later today), etc. and the report on its research workers’ contribution to China’s successful mid-course interception of an ICBM (see this blogger’s post “Chinese Scientists’ DLC Film Enables Mid-course Interception of ICBM” on July 29”)

The United States does not seem to be aware of or care about the rising tensions. The US media quotes US Defense Department spokesman Cmdr. William Urban as saying, “We have helped to sustain a rules-based maritime regime that safeguards for all nations the freedoms of navigation and overflight and other related lawful uses of the sea.”
It means the US will enter the airspace and waters claimed by China in disregard of China’s pretests as the US regards it as normal cruise of its warplane or warship and free of tension.

What if China does have shot down or sunk a US warplane or warship when it has entered the airspace or waters claimed by China?

Is the US prepared for a war with China?

Certainly, US military is always ready. After all it is much stronger than its Chinese counterpart.

What about US Congress and US people? Are they prepared?

Let’s hope the war of words will not grow into war of deeds.

Article by Chan Kai Yee in response to The New York Times’ report.

Full Text of the report can be viewed at http://www.nytimes.com/2015/07/31/world/asia/china-blames-us-military-actions-for-tensions-in-the-south-china-sea.html

One Comment on “Will War of Words between China and US Grow into a War of Deeds?”