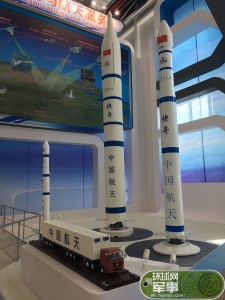 Model of China’s Kuaizhou anti-ASAT rocket able to launch a replacement satellite as soon as it has been destroyed by enemy anti-satellite weapon. Mil.huanqiu.com photo

Satellites are vital in modern war. Without them there will be no navigation, positioning, communications, reconnaissance and missile guidance capabilities in modern warfare. We can foresee that in a modern large-scale war, satellites will first be destroyed. As a result, the capability to quickly make up for the destroyed satellites will be the key in winning the war.

Every military power in the world is developing its anti-satellite (ASAT) capabilities. China is no exception. However, when a satellite has been destroyed by enemy ASAT rocket, it take a few days to install a replacement satellite on a rocket, erect the rocket and launch the replacement. The military will suffer greatly if it installs its destroyed satellites later than its enemy.

According to sources, China has developed its unique anti-ASAT capabilities in having developed and deployed its Kuaizhou anti-ASAT system.

In that system, there are lots of ready-made Kuaizhou satellites with integrated rockets installed on mobile vehicles. Soon after a satellite has been destroyed, a Kuaizhou rocket will be loaded with liquid fuel and go out of the tunnel it has been hiding to quickly launch a replacement satellite. As China is able to replace the destroyed satellite much quicker than its enemy, it will be able to quickly recover its satellite navigation, positioning, communications, reconnaissance and missile guidance capabilities to win the war.

Comment by Chan Kai Yee on mil.huanqiu.com’s report in Chinese “China’s Kuaizhou rocket looks exactly like a ballistic missile when it is launched”