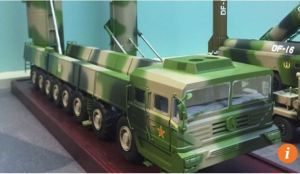 The model of DF-31AG missile system on display at Military Museum. Photo: Handout

In my previous post, there is description of China’s new DF-31AG mobile ICBMs showcased in China’s military parade at Zhurihe training center on July 30 and provides photo of the ICBMs in the parade. Now in its report “US within reach: China shows off new and improved advanced missile system” SCMP provides a better photo and more detailed description of the ICBM as it is showcased in China’s Military Museum.

It says that DF-31AG’s range is 11,000 km the same of DF-31A, enough to cover the entire continental United States.

However, unlike DF-31A whose carrier is limited to hard surfaced roads, DF-31AG is based on an eight axle launch vehicle that can go off-road as it adopts the technology used in intermediate-range missiles such as the DF-26 and long-range DF-41 that enable them to need no prepared launch site as their carriers can stop at any time to fire a nuclear warhead. This has greatly improved DF-31AG’s survivability.

Comment by Chan Kai Yee on SCMP’s report, full text of which can be found at http://www.scmp.com/news/china/diplomacy-defence/article/2103880/china-gives-glimpse-advanced-missile-and-launch-system