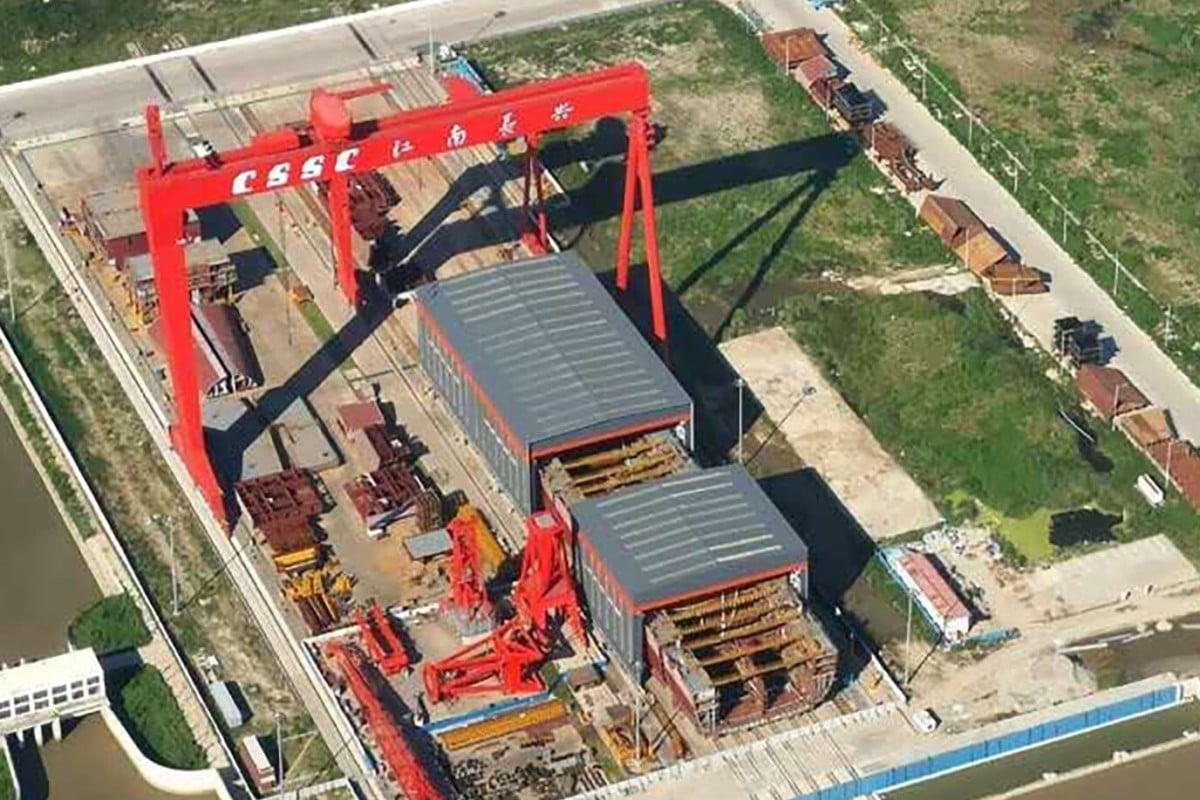 Photos taken by military enthusiasts and posted on social media show the Type 002 aircraft carrier under construction in a dry dock in Jiangnan Shipyard outside Shanghai. Photo: Weibo

China is expected to launch its next-generation aircraft carrier within a year and construction on a sister ship for the new giant vessel has been hastened, two sources close to the projects said.

The Type 002 aircraft carrier – the country’s third carrier and the second to be domestically developed – has started the final assembly process, two independent sources told the South China Morning Post.

“Assembly of the new aircraft carrier has begun and is expected to be completed in the first half of next year, because the Covid-19 pandemic slowed down progress,” said the first source, who requested anonymity because of the sensitivity of the issue.

“Workers are also starting the keel-laying for the new carrier’s sister ship. Both ships have been built by the Jiangnan Shipyard outside Shanghai.” Laying the keel is deemed the official start of construction on a new ship.

The second source said initial construction work for the sister Type 002 carrier had started as early as 2018, but it was halted last year for technical reasons.

“Construction for the second Type 002 will be faster than the first one because workers have learned and overcome a lot of problems building the first one,” the second source said. “It’s a challenging job because the Type 002 is our country’s first domestically designed aircraft carrier.”

Recent photos circulated on mainland China’s social media platforms showed two huge parts berthed in a dry dock and assembled from prefabricated vessel components. There were incomplete flight decks on the top of them. The images showed that much progress had been made compared with
previous satellite images taken in April 2019

by the US think tank the Centre for Strategic and International Studies.

Construction on the first Type 002 carrier started in early 2015. It will become China’s third after the
Liaoning

Unlike the first two Russian-designed Type 001 aircraft carriers that were equipped with ski-jump ramps, the new vessel will have the world’s most advanced electromagnetic aircraft launch system, equal to that used by the US Navy’s new-generation Gerald R. Ford-class aircraft carrier.

The electromagnetic take-off technology means less wear and tear on the aircraft and allows more planes to be launched in a shorter time than the ski-jump system.

Hong Kong-based military commentator Liang Guoliang said the Type 002 was not expected to be nuclear-powered because so far only Chinese submarines had used the technology and none of its surface warships were nuclear-powered.

“The nuclear-powered technology is designed for China’s fifth aircraft carrier, which is likely to be built in the Dalian Shipbuilding yard,” Liang said, referring to the manufacturer that built the Shandong ship.

“The Central Military Commission (CMC) decided to install steam catapults on the Type 002 carrier when it started construction in February 2015, but the plan was changed when Real Admiral Ma Weiming successfully developed the electromagnetic take-off technology that year.” 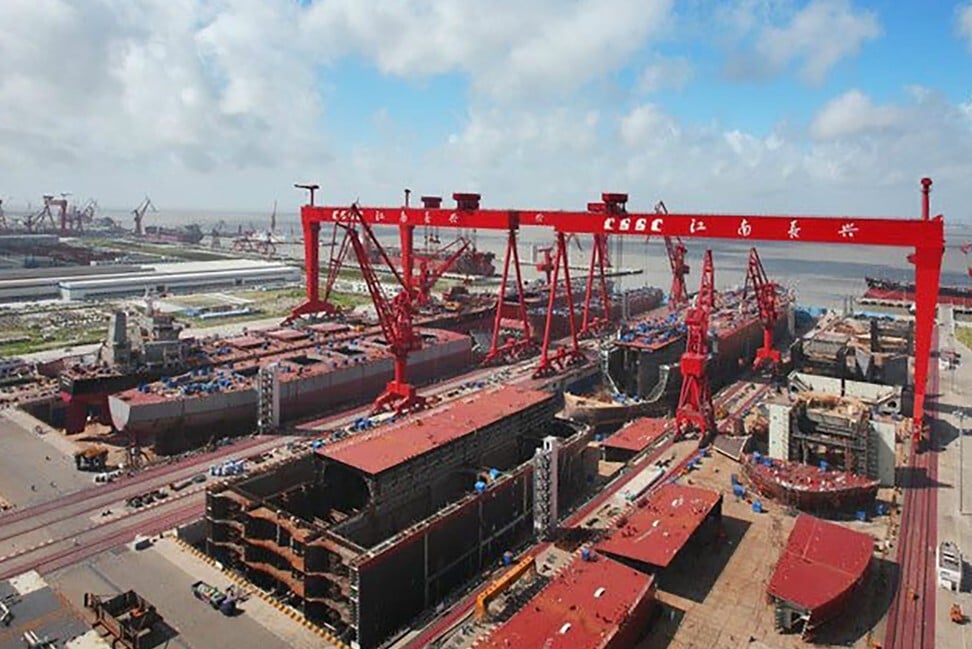 The new Type 002 aircraft carrier – to be the Chinese navy’s third – has entered key assembly process in a dry dock in Jiangnan Shipyard outside Shanghai. Photo: Weibo

Liang said he expected that a

designed for the Type 002 would make its debut when the first advanced warship was ready to be launched next year.

However, Zhou Chenming, a researcher from the Yuan Wang think tank, a Beijing-based military science and technology institute, said the Type 002 carrier would continue to carry the J-15 ship-borne fighter jet, which is now flying on the decks of the Liaoning and Shandong.

China bought its first aircraft carrier, the Liaoning, from Ukraine in 1998 and spent eight years retrofitting it. The ship is the only Chinese carrier to have reached initial operational capability (IOC), the basic requirement for warships. The Shandong is expected to meet IOC standard next year.

Zhou said the Liaoning had been used as a training platform for crew members of China’s new aircraft carrier strike groups.

“The Liaoning is too old to be a warship as its hull was built in 1985. China’s blue-water navy should be based on the new-generation carrier strike groups like Type 002, or even future Type 003 carriers, and other advanced warships,” Zhou said.

China plans to build at least

six aircraft battle groups for the water by 2035

, as the Asian giant tries to equal US naval strength in the Pacific region.

“Unlike the US Navy which has a global strategy, all China’s aircraft carriers can only be used for offshore defence because of China’s geographic location, where all neighbours keep a close eye on it.”

The United States remains the world’s strongest naval force and has 11 carriers, with two more under construction.

This article appeared in the South China Morning Post print edition as: New aircraft carrier expected to launch within a year