US President Donald Trump is pressing allies and others to ditch Huawei-made 5G equipment. Image: Facebook

TOKYO – The United States, Japan, Australia and now Britain have banned Huawei from their 5G wireless telecom networks. Canada seems likely to follow, New Zealand is moving in the same direction and Singapore’s two largest network operators have chosen to use equipment from Ericsson and Nokia rather than the Chinese tech giant.

The Five Eyes intelligence-sharing network, comprised of the US, UK, Canada, Australia and New Zealand, and two of their key Asian allies are moving into alignment on the issue.

Meanwhile, after the skirmish between Chinese and Indian troops in the Himalayas in which 20 Indian soldiers were killed, India banned WeChat, TikTok and 57 other Chinese internet applications on national security grounds. Huawei’s 5G equipment seems likely to meet the same fate in India.

Vietnam and Taiwan, which have their own particular issues with China, do not use Huawei equipment. Thailand, Malaysia and the Philippines do. Indonesia is not yet prepared to adopt 5G. Cambodia, not surprisingly, is going with Huawei and ZTE.

Former Malaysian Prime Minister Mahathir, speaking at the Foreign Correspondents’ Club of Japan last year, said Huawei “can spy as much as they like, because we have no secrets.”

South Korea – which both leads the world in the roll-out of 5G services and has its own telecom equipment maker, Samsung Electronics – is a special case. Huawei supplies less than 10% of the 5G equipment used in South Korea, and that equipment goes to LG U+ (Uplus), the country’s smallest carrier.

Visitors look at television monitors by Samsung Electronics during the Korea Electronics Grand Fair at an exhibition hall in Seoul on October 27, 2016. Photo: AFP/Jun Yeon-Je

Samsung Electronics supplies the nation’s two dominant carriers, SK Telecom and KT, and has shipped 5G equipment to KDDI in Japan, ATT, Verizon and Sprint in the US and other customers overseas. Samsung also operates in the Chinese city of Xian with two fabs making NAND (short for “not and”) Boolean operator and logic gate flash memories, which it supplies to Huawei.

Samsung Electronics and South Korea have no economic interest in confronting Huawei. The US, on the other hand, has been badgering South Korea to get rid of Huawei equipment altogether.

That would almost certainly lead to retaliation from China and therefore might not happen. With Ericsson and Nokia also in the market, Huawei appears to have no further growth potential in South Korea.

Russia has welcomed Huawei 5G, as have Turkey, South Africa, Mexico, Brazil and several other countries, but not exclusively. Huawei is active in Ukraine, but that country seems ripe for an American-led campaign of disassociation.

The European Union, which has Ericsson and Nokia to protect, has not banned Huawei but is unlikely to let it dominate its 5G networks.

In 2019, Huawei’s regional sales including network equipment, cell phones and other products were distributed as such: China 59%; EMEA (Europe, Middle East & Africa) 24%; Asia-Pacific 8%; and the Americas 6%.

Over the five-year period, Huawei’s overseas sales almost doubled while its domestic sales increased 4.6 times. With the loss of the UK market, the probable loss of the Indian market and increasingly severe attitudes toward China in Western Europe, Huawei’s multi-year overseas expansion could go into reverse.

China is the world’s largest and – aside from South Korea – most rapidly advancing 5G market. By the end of 2020, industry sources expect China to account for more than 50% of worldwide 5G base station installations and more than 70% of total 5G subscribers.

A majority of those base stations will be supplied by Huawei and most of the remainder by ZTE.

To add further perspective, as Asia Times’s Spengler (David P. Goldman) put it recently: “Ericsson appears to have a 10% share in China’s 5G buildout … In terms of sales, that’s roughly equal to 100% of the US 5G equipment market.”

China reportedly has more than 250,000 5G base stations in operation now and is targeting 500,000 by the end of the year, which should bring 5G services to every major city. The next big target is five million.

GSMA, the global mobile communications industry association, estimates that China will invest approximately US$180 billion in mobile networks by 2025, with 90% of that spent on 5G. By then, the number of Chinese 5G subscribers is expected to exceed 800 million.

In addition to the upgrade of ordinary mobile communications and smartphone applications, widespread access to 5G should enable significant advances in public and private-sector online services, transport system monitoring and control, and industrial automation.

This is true in Japan as well, where NEC and Panasonic are introducing customized, closed (presumably secure) 5G wireless networks designed for use in the production control systems of so-called “smart factories.”

The increasing industrial sophistication of China, which is also the world’s largest and fastest-growing user of industrial robots, should offset its loss to lower-wage countries of hand assembly work.

It is fashionable in the West to say that this will make humans obsolete and exacerbate an already serious unemployment problem, but that is not necessarily the case.

Japan has both the world’s top industrial robot and factory automation equipment industry and the lowest unemployment rate among large industrial nations. For Japan, automation is a creator of higher quality jobs and a solution to the problem of a shrinking labor force – a demographic problem shared by China. 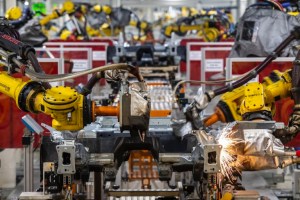 Taking a 10-year view, it would be prudent to consider a world in which China becomes more and more like Japan in this regard, only much bigger.

The US is trying to put a stop to this by cutting off Huawei’s and China’s access to components and equipment produced using American technology. This may have an impact in the short run, but it is already providing an incentive for China to diversify away from dependence on its rival and develop its own capabilities.

It would therefore also be prudent to consider a world in which European, Japanese, Korean – and Chinese – products and technologies have replaced those that Huawei previously bought from America.

Scott Foster, the author of Stealth Japan, is an analyst with Lightstream Research, Tokyo.

Note: This is Asia Times’ article I post here for readers’ information. It does not mean that I agree or disagree with the article’s views.

6 Comments on “World splitting into pro and anti-Huawei camps”