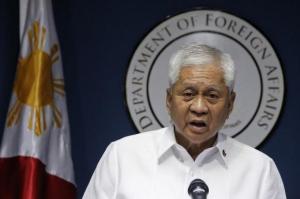 The Philippines said on Monday that China’s “expansion agenda” in the disputed South China Sea threatened security and stability in the region, calling on all claimant states to halt construction activities that may raise tensions.

“Let’s call for a moratorium in terms of activities that escalate tension,” del Rosario told ANC Television on Monday. “Now, let’s do that while we work on an expeditious conclusion of the code of conduct and effective implementation.”

“They’re accelerating their expansion agenda for the following reasons … one is they want to do this before the conclusion of the code of conduct. They’re also trying to do this very quickly in anticipation of the handing down of the tribunal award.”

Southeast Asian states have been pressing China to conclude a Code of Conduct – a set of rules governing naval actions – for the South China Sea. Last year, the Philippines filed a case at the U.N. Arbitral Court in The Hague to clarify its rights to explore and exploit resources under the U.N. Convention of the Law of the Sea. China has refused to participate in the case.

Chinese Foreign Ministry spokeswoman Hua Chunying said China had a right to do what it wanted on its islands in the South China Sea as they were Chinese territory, and criticized the Philippines for what it called Manila’s illegal occupation of some of the islands and construction work there.

“On the one hand, the Philippines keep making further provocative moves, and on the other hand make thoughtless remarks about China’s appropriate moves within the scope of our sovereignty,” she told a daily news briefing. “This is totally unreasonable.”

China claims 90 percent of the South China Sea, believed to have huge oil-and-gas deposits and rich in fishery resources. Brunei, Malaysia, the Philippines, Vietnam and Taiwan also have claims over the sea where about $5 trillion of ship-borne trade passes every year.

Del Rosario said Chinese construction in the Spratlys was an attempt to alter the character of the features, converting reefs into islands to be able to increase maritime entitlements.

China and Vietnam are also involved in an increasingly bitter spat over the operations of a Chinese oil rig in another part of the South China Sea, around the Paracel Islands.

China has made Woody Island, which Beijing calls Sansha city, the hub of its operations on the Paracels, including building a port and airport facilities there. 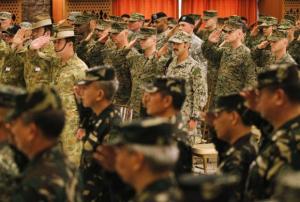 U.S. and Filipino military officers salute during the opening ceremony of the Balikatan 2014 Joint Exercise inside the Armed Forces of the Philippines (AFP) headquarters at Camp Aguinaldo in Quezon city, metro Manila May 5, 2014.
Credit: Reuters/Romeo Ranoco

Thousands of Philippine and U.S. soldiers began annual war games on Monday, the first under a new security pact with the United States, focusing on maritime security in the face of China’s growing naval presence in the disputed South China Sea.

The joint exercises “Balikatan” (shoulder-to-shoulder) would test the combat readiness of the two oldest allies in this part of the world to respond to any maritime threats, including piracy and humanitarian assistance and disaster response.

The new security pact was signed last week just hours before U.S. President Barack Obama visited. Obama said the agreement was a testament to Washington’s “pivot” to Asia and was an “ironclad” commitment to defend the Philippines.

The Philippines has territorial disputes with China over the South China Sea, which is said to be rich in energy deposits and carries about $5 billion in ship-borne trade every year. The Spratlys in the South China Sea are also claimed by Brunei, Malaysia, Taiwan and Vietnam.

“Tensions in the Asia-Pacific region have increased due to excessive and expansive maritime and territorial claims, undermining the rule of law,” Foreign Affairs Secretary Albert del Rosario said at the opening ceremony at the main army base in Manila.

“The aggressive patterns of behavior aimed at changing the status quo threaten peace and stability in the region. Balikatan 2014, with its focus on maritime security, strongly supports our capabilities to address these challenges.”

“We hope that the relevant U.S.-Philippines drills can work in this direction,” she told a daily news briefing.

On Saturday, a navy plane dropped food and water to troops stationed on a transport ship that ran aground on the disputed Second Thomas Shoal in the South China Sea. Chinese coast guard ships have set up a blockade around the shoal.

Nearly 5,500 American and Filipino troops are taking part in the two-week drills in different parts of the main island of Luzon. The war games will see U.S. F-18 fighters rehearse bombing runs and troops involved in live fire drills.

Under a new security pact, the Enhanced Defence Cooperation Agreement, signed last week during Obama’s visit, the U.S. will have wider access to local bases and construct facilities to store supplies and equipment for 10 years in exchange for increased support on maritime security and humanitarian assistance.

The annual war games come under the 1951 Mutual Defense Treaty, part of a web of security alliances the United States built in the Asia-Pacific region during the Cold War.

Dozens of leftwing activists protested outside the main army base in Manila, saying the Americans were using China as a bogeyman to gain a forward base in the Philippines.

“Our capacity to defend our territory against China will not be improved just because there are training exercises.”

Philippines says U.S. obligated to help in case of attack 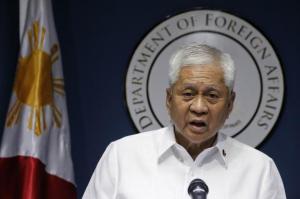 The United States has a treaty obligation to help the Philippines in case of an attack on its territory or armed forces in the South China Sea, the Philippine foreign minister said on Wednesday, rejecting questioning of a security pact.

The deal was testimony to an “ironclad” U.S. commitment to defend its oldest Southeast Asian ally, U.S. President Barack Obama told troops from both countries this week while on a visit to Manila.

But Obama did not say categorically the United States would defend the Philippines in its territorial disputes with China in the South China Sea, leading to some questions in the Philippines about the scope of the pact.

“Under the Mutual Defense Treaty, the U.S. will come to the assistance of the Philippines if our metropolitan territory is attacked or if our armed forces are attacked in the Pacific area,” del Rosario said.

“In 1999, in a diplomatic letter, the U.S. affirmed that the South China Sea is considered as part of the Pacific area.”

China claims virtually the whole of the South China Sea and has in the past couple of years been much more assertive in staking its claim.

In 2012, China seized control of a disputed reef known as the Scarborough Shoal, preventing Filipino fishermen from getting near the rocky outcrop.

They continue to blockade the area.

The Philippines in March lodged a case against China at an arbitration tribunal in The Hague to try and settle the festering territorial dispute.

Brunei, Malaysia, Vietnam and Taiwan also have claims on the South China Sea, where $5 trillion of ship-borne trade passes every year and is believed to have rich deposits of oil and gas.

China’s Foreign Ministry said maintaining peace and stability “accords with all sides’ interest” and would require hard work by all sides.

“The (Chinese) people have reason to demand that any agreement signed by the United States and the Philippines accords with this principle and does not harm mutual trust with other countries in this region and regional peace and stability,” ministry spokesman Qin Gang told reporters at a regular briefing.

“Through the Enhanced Defense Cooperation Agreement, the Philippine government has surrendered our sovereignty to free-loading U.S. forces,” said Renato Reyes of the left-wing Bayan (Nation) group.

China calls on Manila to meet it halfway on fishing rules

China called on the Philippines on Friday to meet it halfway on new Chinese fishing rules in the disputed South China Sea, adding that Beijing was always willing to make efforts to resolve such issues via talks.

China imposed fishing restrictions from the beginning of year, requiring foreign fishing vessels to obtain approval before entering the waters.

Claims by an increasingly powerful China over most of the energy-rich South China Sea have set it directly against Vietnam and U.S. ally the Philippines. Brunei, Taiwan and Malaysia also claim parts of the waters and China has a separate dispute with Japan in the East China Sea.

The Philippines will defy the new Chinese rules and the navy will escort fishing boats to protect them if necessary, the country’s defense secretary said on Thursday.

But Chinese Foreign Ministry spokesman Hong Lei struck a conciliatory line when asked about the comments at a news briefing, though he underscored China’s resolve to defend its sovereignty.

“China’s will to safeguard its territorial sovereignty and integrity is unwavering. At the same time, we always put forth efforts to resolve the relevant issue through dialogue and consultations,” Hong said.

“We hope the relevant country can adopt an objective stance, meet China halfway on the relevant issue, and put forth concrete efforts to safeguard regional peace and stability.”

Addressing his regional counterparts at a meeting in Myanmar, the Philippines foreign minister said the new rules, and China’s introduction last year of an air defense identification zone, had boosted tensions.

“Clearly, in addition to unilateral measures to change the status quo and threats to the stability of the region, these latest developments violate the legitimate rights of coastal and other states under international law…and more specifically the principles of freedom of navigation and overflight,” Foreign Secretary Albert del Rosario told the gathering.

In comments to ministers from the 10-nation Association of South-East Asian Nations (ASEAN) provided by his ministry, del Rosario said the developments could undermine ASEAN’s work to establish a “code of conduct” on the South China Sea.

Foreign ministers of ASEAN are holding four days of meetings in the ancient city of Bagan to set the agenda for Myanmar’s chairmanship of the bloc this year. The South China Sea is likely once again to overshadow ASEAN meetings this year.

The United States has also expressed concern about Chinese moves in the South China Sea, which have included confrontations between Vietnamese fishermen and Chinese patrol ships.

Source: Reuters “China calls on Manila to meet it halfway on fishing rules”

Singtao Daily reports: Philippine ambassador to China’s recent stroke provided Philippine Foreign Affairs Secretary Albert del Rosario with the opportunity to make an informal visit to China and meet Chinese Foreign Minister Yang Jiechi. It had been his first visit to China since the standoff between Chinese and Philippine boats at HuangyanIslands in mid-April

It was reported that Rosario once complained to Philippine media, saying that due to the standoff at Huangyan Islands, his request for visiting China was rejected by China times and again. However, the accidental stroke suffered by Philippine ambassador to China Brady provided him with an excuse to visit China.

Brady, 71, had been retired, but when the disputes over sovereignty to the South China Sea fiercely intensified, Philippine President Benigno Aquino III asked her to serve as ambassador again, hoping that she might ease the tension between the two countries by her professional expertise in Chinese affairs. On August 22, she suffered a sudden a stroke at her official residence and was immediately hospitalized.