Chinese women learn how to marry ‘elite’ foreigner in 90 days 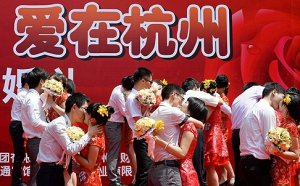 Couples find marital bliss at a mass wedding in Hangzhou, but others may need some help. Enter: Seek-a-Husband training. Photo: Reuters

Reblog of Ernest Kao’s blog at SCMP on May 31

Droves of women from across China flocked to Shanghai’s Love and Marriage Expo this month in hopes of learning a tip or two about how to get hitched.

But Liang Yali, founder of the Seek-a-Husband Training Programme, has been teaching such skills in the metropolis for years.

Ninety days – that’s all it will take for her training programme to teach single women how to find – and marry – that laowai (expatriate) knight in shining armour, Liang purported, in an interview with the Modern Express newspaper.

After a 1½-month courtship, Liang managed to find the American husband of her dreams – you know, the “honest, considerate type” who happens to be a general manager at some big multinational corporation. The two are now happily married.

Liang decided to enter the “marriage business” in 2009 after her experiences as a divorced and single mother. She said she had hoped to “mass produce” her happiness to the spurned and desperate.

Her Seek-a-Husband course, which specialises in teaching women how to find “elite Westerner” husbands, launched in Shanghai to widespread acclaim – she boasts that her success rate has stayed at a constant 60 per cent – as well as controversy.

The programme’s target market is women above 35, divorcees and the so-called shengnu or “left-behind woman”, although clients are getting younger by the day.

Nearly 2.87 million mainland couples divorced in 2011, up 7.3 per cent from 2010, according to Ministry of Civil Affairs’ statistics.

Meanwhile, a survey conducted by the ministry last year showed that 70 per cent of mainland women would tie the knot only with a man who owned at least one flat.

“Many Chinese women over the age of 35 experience difficulties finding husbands domestically, but in the west, in many foreigners’ minds, women aged 35 are seen as most attractive,” Liang told Modern Express. She said her courses teach women how to select appropriate targets, use charm and to sell their “intellect”.

She gave examples of success stories such as how a 35-year-old woman from northeastern China learned a bit of English and managed to find a husband who worked as a manager at a large German construction company.

The least expensive one-day course costs 2,800 yuan (HK$3,500), and more advanced modules can be taken for more than 40,000 yuan. There’s also the “unlimited” package, which entitles customers to attend all classes for a cool 100,000 yuan.

Liang’s venture has been slammed repeatedly for ethical reasons. It drew heat recently after its youngest client was reported to be just 17 years old. It has also been criticised for teaching women to “throw money at love” and encouraging young girls to look for rich, expat “sugar daddies”.

But Liang stressed that “if your purpose is to find a rich man, please do not sign up. We are in the business of happiness”.