‘On right side of history’: Xi Jinping praises Kiribati for switch to China 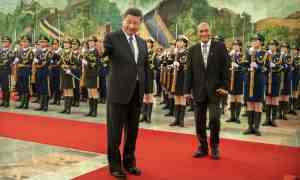 Chinese president Xi Jinping and Kiribati’s president Taneti Maamau during a welcome ceremony at the Great Hall of the People in Beijing on Monday. Photograph: Mark Schiefelbein/AP

China’s president Xi Jinping has praised Kiribati for being “on the right side of history” after the two countries signed a memorandum of understanding in China on Monday.

The agreement, which signs the Pacific nation up to China’s belt and road initiative, comes after Kiribati severed diplomatic relations with Taiwan and established them with China in September last year.

Xi met Kiribati’s president, Taneti Maamau, in the Great Hall of the People in Beijing and thanked him for visiting China.

“Last September, China and Kiribati restored diplomatic relations based on the one-China principle and have ushered in a new chapter of bilateral cooperation,” said Xi, according to video of the meeting released by the Chinese state broadcaster CGTN. “We welcome Kiribati back to the big family of China-Pacific island cooperation.”

“Mr President and the Kiribati government stand on the right side of history,” Xi told Maamau, according to CGTN.

Maamau told Xi: “Kiribati is grateful for the support we have received from China in the last recent months following the normalisation of our diplomatic relations in September 2019.

“Allow me also to take this opportunity to reaffirm my government’s commitments to the ‘one China’ principle and now our deepest respect of your government’s sovereignty to maintain peace and harmony among your people and the world at large.”

Kiribati’s switch in support from Taiwan to China meant Taiwan lost its second diplomatic ally in less than a week, following an announcement from the Solomon Islands that it was breaking away from Taiwan.

Over the decades, dozens of countries – including the US and most western nations – have switched recognition to Beijing, leaving just a handful of countries loyal to Taiwan, largely in Latin America and the Pacific.

The south Pacific has been a diplomatic stronghold for Taiwan, where, until this week, formal ties with six island nations made up more than a third of its total alliances.

The Solomon Islands and Kiribati (pronounced Kiribas) were the largest of Taiwan’s Pacific allies, with populations of 600,000 and 115,000 respectively.

The decision of the two nations to establish relations with China has left Taiwan with four remaining Pacific allies: Tuvalu, Nauru, Palau and Marshall Islands, as well as allies in the Caribbean and Latin America.

China’s concerted attempt to peel allies away from Taipei could be seen as putting pressure on Taiwan’s president Tsai Ing-wen, who is pro-Taiwanese sovereignty, ahead of elections in Taiwan this weekend.

Tsai is favoured to win a second term in Saturday’s election, an outcome that would likely intensify Chinas economic, diplomatic and military pressure over her refusal to accept its insistence that Taiwan is a part of China. Since her election, China has increasingly sought to isolate Taiwan diplomatically while ramping up its threat to use force to annex the self-governing island republic.

Source: The Guardian “’On right side of history’: Xi Jinping praises Kiribati for switch to China”

Note: This is The Guardian’s report I post here for readers’ information. It does not mean that I agree or disagree with the report’ views.