China launched its first-ever carrier rocket from a sea-based platform on Wednesday, CCTV reported, in a milestone in the rapid development of the country’s space program.

The Long March 11 blasted off at 12:06 p.m. from a cargo ship in the Yellow Sea, sending seven satellites into orbit.

Two of those satellites are for pilot telecom projects, two are for weather monitoring, and three are for space data collection and earth observation, CCTV said.

Early this year, China laid out plans for multiple new moon missions, and reiterated its aim to reach Mars by 2020.

Note: This is caixingglobal.com’s report I post here for readers’ information. It does not mean that I agree or disagree with the report’ views.

China to Use Space Station to Detect Nuclear Submarine 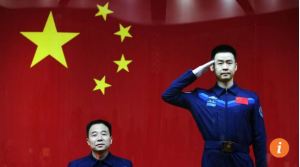 China’s space program is obviously both military and civilian with astronauts from ranking PLA officers, but how will China use its space station for military purpose?

SCMP says in its report today titled “Is China’s latest space mission a step towards PLA tracking of nuclear submarines?”, “Chinese scientists are working on a space-based device that could track gravitational ripples produced by submerged submarines”

SCMP says, “The ultra-accurate timepiece shares its core technology with cold atom interferometers, which can measure tiny changes in gravitational pull with unprecedented sensitivity, and one of the devices, to be built and put on the Chinese space station, could potentially be used to track nuclear submarines.”

In fact, US government space agency NASA is also closely linked with US military, but unlike China, it is not under direct control of the military. I should say that China’s space program is first of all for national security and defense.

Comment by Chan Kai Yee on SCMP’s report, full text of which can be viewed at http://www.scmp.com/news/china/diplomacy-defence/article/2028686/chinas-latest-space-mission-step-towards-pla-tracking 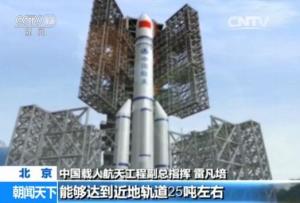 China’s new Changzheng-5 carrier rocket able to carry 25 tons to near-earth orbit. The photo shows that it is ready for its maiden flight.

China will launch its Shenzhou-11 spaceship this month and is making preparations for the maiden flight of Changzhen-5 large carrier rocket. The two projects, if successful, will begin a new development phase of China’s space program.

Shenzhou-11 will dock with China’s Tiangong-2 space lab to send two astronauts into the lab to stay there for 30 days to test the capabilities of China’s future space station in enabling astronauts to stay in the station for a long time.

Soon afterwards, Changzheng-5 will be launched in early November. It is a rocket of brand new structure with 5-meter diameter using a new generation of liquid oxygen-liquid hydrogen and liquid-oxygen-kerosene engine. With much higher loading capacity, it can send 25 tons to near-earth orbit.

China needs Changzheng-5 to send the core cabin of its space station and Change-5 lunar explorer.

China will begin Mars exploration by 2020. It plans to send a spaceship to Mars late 2020 to first circle round Mars and then land on Mars before July 2021.

China is developing a carrier rocket able to send 100 to 130 tons to near-earth orbit for sending astronauts to the moon and exploration of farther planets.

Source: CCTV “60ths anniversary of China’s space efforts: Shenzhou-11 will be launched this month and Changzheng-5 will soon begin its maiden flight” (summary by Chan Kai Yee based on the report in Chinese) 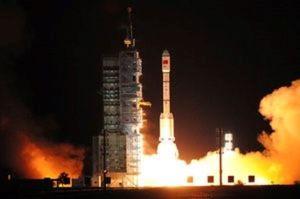 China launched its second experimental space laboratory on Thursday (September 15), part of a broader plan to have a permanent manned space station in service around 2022.

Advancing China’s space program is a priority for Beijing, with President Xi Jinping calling for the country to establish itself as a space power, and apart from its civilian ambitions, Beijing has tested anti-satellite missiles.

China insists its space program is for peaceful purposes, but the U.S. Defense Department has highlighted its increasing space capabilities, saying it was pursuing activities aimed to prevent adversaries from using space-based assets in a crisis.

In a manned space mission in 2013, three Chinese astronauts spent 15 days in orbit and docked with an experimental space laboratory, the Tiangong 1, or “Heavenly Palace”.

China launched its second experimental space laboratory on Thursday, part of a broader plan to have a permanent manned space station in service around 2022.

Advancing China’s space program is a priority for Beijing, with President Xi Jinping calling for the country to establish itself as a space power, and apart from its civilian ambitions, Beijing has tested anti-satellite missiles.

China insists its space program is for peaceful purposes, but the U.S. Defense Department has highlighted its increasing space capabilities, saying it was pursuing activities aimed to prevent adversaries from using space-based assets in a crisis.

In a manned space mission in 2013, three Chinese astronauts spent 15 days in orbit and docked with an experimental space laboratory, the Tiangong 1, or “Heavenly Palace”.

Its successor, Tiangong 2, lifted off on a Long March rocket just after 10 p.m. (1400 GMT) from the remote launch site in Jiuquan, in the Gobi desert, in images carried live on state television.

The Shenzhou 11 spacecraft, which will carry two astronauts and dock with Tiangong 2, will be launched sometime next month.

The astronauts expect to remain in Tiangong 2 for about a month, testing systems and processes for mid-term stays in space and refueling, and conduct medical and other experiments.

The smooth launch imparts a high-tech sheen to week-long celebrations of China’s National Day, starting Oct. 1, as well as this week’s shorter Mid-Autumn Festival holiday that coincides with the full moon.

China will launch a “core module” for its first space station some time around 2018, a senior official said in April, part of a plan for a permanent manned space station in service around 2022.

China has been working to develop its space program for military, commercial and scientific purposes, but is still playing catch-up to established space powers the United States and Russia.

The rover and the Chang’e 3 probe that carried it there were the first “soft landing” on the moon since 1976. Both the United States and the Soviet Union had accomplished the feat earlier.

Note: This is Reuters report I post here for readers’ information. It does not mean that I agree or disagree with the report’ views. 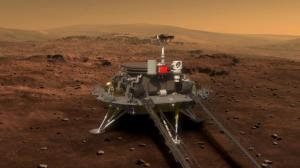 China has showed off its first images of a rover it plans to sent to Mars in mid-2020, which is designed to explore the planet surface for three months, state media said, the latest aim of China’s ambitious space program.

China in 2003 became the third country to put a man in space with its own rocket after the former Soviet Union and the United States.

It has touted its plans for moon exploration and in late 2013 completed the first lunar “soft landing” since 1976 with the Chang’e-3 craft and its Jade Rabbit rover.

China’s latest manned space mission is due in October and is aiming for a manned moon landing by 2036.

State news agency Xinhua, in a report late on Tuesday, said the 200 kg (441 lb) rover would have six wheels and be powered by four solar panels, two more than the rover China shot to the moon and 60 kg (132 lb) heavier.

“The challenges we face are unprecedented,” Zhang Rongqiao, chief architect of the Mars mission, said, according to Xinhua.

The probe would carry 13 payloads including a remote sensing camera and a ground penetrating radar, on what is expected to be a three-month exploration mission blasting off in July or August 2020, the report added.

“The lander will separate from the orbiter at the end of a journey of around seven months and touch down in a low latitude area in the northern hemisphere of Mars where the rover will explore the surface,” it said.

The Beijing News added that the northern hemisphere was not as good a place to utilize solar power as the equator, but that the geographic conditions were better.

Advancing China’s space program is a priority for Beijing, with President Xi Jinping calling for the country to establish itself as a space power.

China insists its program is for peaceful purposes, but the U.S. Defense Department has highlighted China’s increasing space capabilities, saying it is pursuing activities aimed to prevent adversaries from using space-based assets in a crisis.

Apart from its civilian ambitions, Beijing has tested anti-satellite missiles, and the U.S. Congress has banned NASA from engaging in cooperation with its Chinese counterpart due to security concerns.

Note: This is Reuters report I post here for readers’ information. It does not mean that I agree or disagree with the report’ views. 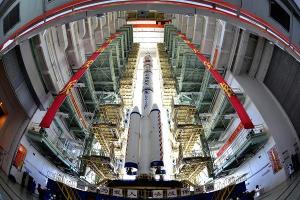 CNBC shows its worry in its report on February 20 titled “Is China’s race to space a military ploy?”, saying “A sequel to ‘Star Wars’ may arrive sooner than anyone expects, as China funnels vast resources into an outer space program that may stoke new tensions with the United States.”

The report shows US media’s ignorance of China’s real capabilities as reflected in my previous posts:

Secrets of the Space Weapons China Will Develop dated June 19, 2014

To deal with the problem, the report quotes James Andrew Lewis, director of Strategic Technologies Program, Center for Strategic and International Studies, as saying: “While the military aspects of Chinese space ambitions need to be monitored and understood, Logsdon said, the best way to do that is to engage with the Chinese and their space program.”

“‘We can get more done if countries in space work together,” he said. ‘The days of one country being the dominant space power are behind us.’”

That is too late. The report says, “China hopes to have its very own space station online by 2022 — a space station that some security analysts worry could be used for military applications.”

Full text of CNBC’s report can be viewed at http://www.cnbc.com/2016/02/18/chinas-space-missions-in-2016-tied-to-military-ambitions.html

China Has the Duty to Take over US Leadership in Space

It is human Race’s duty to explore the space. Since the US has reduced its funds sharply for space exploration and prefers to be world leader in military power, China has to make more contributions in space.

Popular Science publishes Jeffrey’s post yesterday titled “China Showcases Plans To Become The Leading Space Power” that gives detailed description on China’s efforts including the Beidou Navigation System better than US GPS, the establishment of China’s Space Debris Monitoring and Application Center to track space debris and issue warnings to Chinese spacecraft and the development of Long March 5 rocket that can carry a payload of 25 tons.

It carries the following chart of China’s space exploration schedule

In the long run, the articles says, “With nearly 130 spacecraft and satellites in orbit, China has shot its way to global prominence in space, like so many terrestrial technological categories. And this is jus the start. Far off future Chinese space projects include a spate of missions to Mars and Jupiter, large space stations,130 ton payload super heavy “Moon rockets”, electrically propelled spacecraft and reusable launch systems.”

Full text of the article can be viewed at http://www.popsci.com/china-show-cases-space-plans