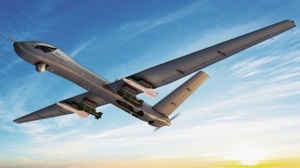 Officials from AVIC’s Chengdu Aircraft Design and Research Institute (CADI) subsidiary were quoted as saying at the Wing Loong UAV Development Conference that the company is aiming to ready the Wing Loong I-D for its maiden flight and entry into the international market within 2018.

“The Wing Loong [I-D] is the first of a new generation of improved reconnaissance-strike UAS [unmanned aerial systems] in China,” said Li Yidong, chief designer of the Wing Loong UAV family and vice-chief designer of CADI. “It will help enhance the influence of [the] Wing Loong brand in the global military trade market with other members of the family.”

The Wing Loong I-D is reportedly an improved version of the Wing Loong I UAV, which has entered service with the People’s Liberation Army Air Force (PLAAF) under the designation of Gongji-1 (Attack-1).

A scale model of the new design was revealed for the first time at Airshow China 2016. According to specifications provided by AVIC during the event, the Wing Loong I-D is expected to be approximately 8.7 m in length, 3.2 m in height, and have a wingspan of 17.6 m.

The Wing Loong I-D will also be powered by a piston engine of unknown providence, with the company aiming to achieve a maximum speed of 280 km/h and a service ceiling of 7,500 m (24,600 ft). An operating endurance of 35 hours is also desired.

Note: This is Jane’s 360’s report I post here for readers’ information. It does not mean that I agree or disagree with the report’ views.